Personally, I don’t think the gay thing is that big a deal, but that is the angle they are using to sell the movie. According to his co-star Armie Hammer, who plays his #2 and alleged secret lover, He won’t just have a kissing scene with DiCaprio, he’ll have “A ton of kissing scenes” with DiCaprio.

Also starring in the film, but not necessarily making out with DiCaprio are: Josh Lucas, Ed Westwick, and Naomi Watts.

Here’s the first set shot of DiCaprio on set: 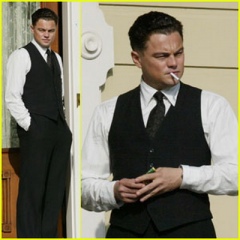