Check out the first peek from the set of the highly awaited Comic Book Movie ‘R.I.P.D.’

There’s a lot of buzz around the upcoming R.I.P.D movie adaptation starring Ryan Reynolds, Kevin Bacon and Jeff Bridges. It is finally starting to film and the photos are already flying on to the net. Today we’ve got some of the first shots available of Kevin Bacon and Ryan Reynolds.

Here’s the plot of the movie:
The Dark Horse comic R.I.P.D. by Peter M. Lenkov is adapted by Universal Pictures. Ryan Reynolds stars as Walker in this fantasy crime film , a murdered cop who joins the Rest In Peace Department–a police force comprised of ghosts who battle spirits unready to depart this world. He does so in exchange for the chance to hunt down his murderer, who will be played by Bacon. – Celeb Buzz 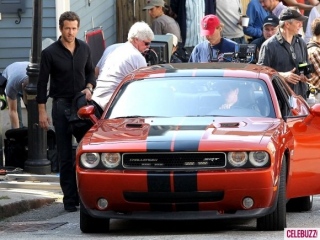