The director spared no details in giving the streetscape an authentic look, everything from fake metro station signs to plastic cherry blossoms attached to the trees.

Production of Guillermo Del Toro’s Monster epic “Pacific Rim” is currently filming in Toronto under the name “Still Seas” and they’ve turned downtown Toronto into the epicenter of a major monster attack. The film, which stars Charlie Day, Idris Elba and Charlie Hunnam isn’t set for release until July 12, 2013, but this first footage and pile of set pics is enough to start getting me really excited about the film. 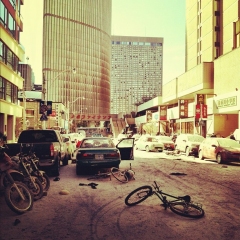