Rothman, who is just now realizing that the right amount of time and creative vision is important, admits that if they were to reboot Daredevil anytime soon it would… 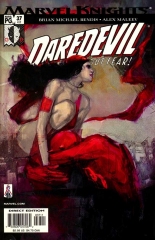 Ever since a little film called The Dark Knight broke most if not all summer records and made a ton of money, studio execs and people who never once cared about making good movies (only about making a lot of money) are now suddenly changing their ways at how to approach and interpret comic book properties.

In a recent interview with 20th Century Fox co-chairman, Tom Rothman, IESB revealed that Fox is seriously considering “rebooting” the Daredevil franchise. As a huge Daredevil fan, this is fantastic news.

Rothman, who is just now realizing that the right amount of time and creative vision is important, admits that if they were to reboot Daredevil anytime soon it would need a directory “who has a genuine vision,” and goes on to praise Nolan as a visionary director.

The movie would not merely be a dark version of Daredevil. Rather it would be taken much more seriously unlike Mark Steven Johnson’s 2003 film starring Ben Affleck and Jennifer Garner, which despite making over $100 millions at the box office was negatively received by critics and fans worldwide. This fan included!

While Rothman did not say there would be a Daredevil reboot anytime soon, it is something that may be a distant possibility.