The fact that the actual commercial is so short might just let Miller get his stuff done before he either puts me to sleep or gives me a seizure.

I really like Frank Miller, but I’ll be honest, I’m that one guy you heard rumors about who hasn’t had to go buy a brand new case of fan boy diapers every time he puts something out on the screen. He’s great, ya, he’s got a super cool visual style… woo. It all kinda looks the same after the first five minutes. If Sin City didn’t prove that to you than The Spirit damn well should have.

Now, the man who has absolutely brought us some of the greatest Batman and Daredevil stories ever created is now bringing us… that’s right, a perfume commercial. Now don’t get me wrong, commercials can be high art. They can be entertaining, they can make you laugh or cry. Hell, before he was Giles, Tony Head had US audiences captivated for years over his Folgers coffee romance. That said, I don’t care how awesome your commercial is… does it really warrant it’s own trailer? The answer is no. 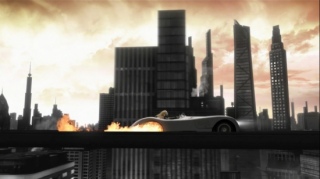 So why am I even talking about it on the site? Because it is pretty cool and they snagged Chris Evans and Evan Rachel Wood to be in it. Plus, the fact that the actual commercial is so short might just let Miller get his stuff done before he either puts me to sleep or gives me a seizure.

Check out the trailer now, and watch for the full commercial During the MTV Music Awards September 12th… or right here shortly after.

Oh, and the thing that you don’t care about, but that the company is paying millions to get into your head… the commercial is for a new perfume by Gucci.