Does this mean that George Lucas might guest-direct an episode?

It’s widely known that George Lucas had plans to create a live-action Star Wars series based around bounty hunters for years. There are some sources that even report the Lucasfilm founder had nearly 200 episodes completely scripted for the series. Sadly, the chances of that series finding life died when Star Wars was purchased by Disney.

Now, as the Disney Streaming Network starts chugging away towards launch, Lucasfilm is working on a new Star Wars series, this time with Iron Man director Jon Favreau behind the camera. As we reported before, the series is called ‘The Mandalorian’ and it takes place seven years after the events of Return of The Jedi. The show is slated to have a revolving door of directors that includes Dave Filoni, Taika Waititi, Bryce Dallas Howard, Deborah Chow, and Rick Famuyiwa.

Just a few minutes ago, show-runner Favreau posted a photo to Instagram that shows that Lucas may have sold Star Wars, but he still likes to pop in and see how the new kids are doing things. We don’t know what they talked about or what Lucas thinks of the new series, but one thing we do know is that George seems to have forgotten to smile when the cameraperson said “Cheese!” 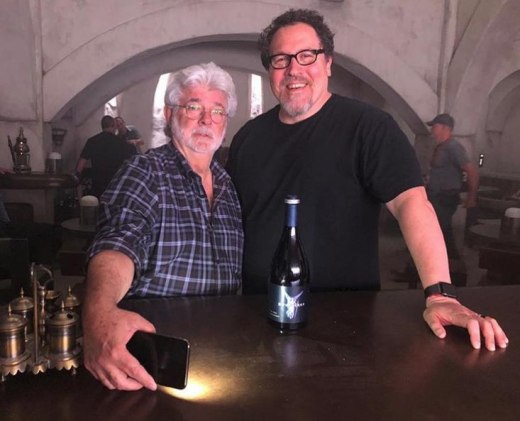