This news was broken by Campbell himself who also adds that Kilowog and Tomar-Re and Abin Sur will all make appearances. 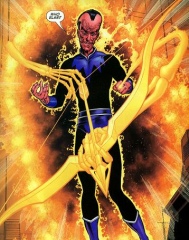 This news was broken by Campbell himself in a press junket for “Edge of Darkness,” his upcoming action thriller opening January 29. Meanwhile, Campbell also dismisses rumors that actor Jackie Earle Haley (Watchmen, Nightmare on Elm St.) was in the talks for the role. Citing “No, that’s completely wrong.”

Continuing instead, “In fact, we’re in negotiations with Mark Strong to play Sinestro.”

“He’s not only a wonderful actor, but he looks like Sinestro,” he added. “If you look up old pictures of Sinestro, he’s very like him. The Jackie Earle Haley thing, somebody told me about it this morning; I had never heard it before in my life.”

If negotiations pan out for Strong, this would mark his second appearance in a comic book movie, with the first playing mobster Frank D’Amico in Matthew Vaughn’s adaption of John Romita Jr. and Mark Millar’s “Kick-Ass.”

Campbell also offered tidbits about a list of characters from the Green Lantern’s universe that ought to be making an appearance in the film — with Kilowog being one of them.

“Well, Kilowag will be,” said Campebll. “Tomar-Re is in it. Sinestro is in it. Abin Sur is in it. All the origin people. Carol [Ferris], of course, who will be played by Blake Lively. All the main characters are there, and it’s a complex story. The origin story of Green Lantern is complex, probably one of the most complex, which makes it a challenge to get it right.”