In Case You Missed It: Neil Patrick Harris’s Opening Number From The Tony Awards

After an intro from the cast of The Book Of Mormon, NPH hit it out of the park with another awesome opening number for the Tony Awards.

Last night was the 2012 Tony Awards, and once again, Neil Patrick Harris was in the house to host and show why he is pretty much the baddest ass at anything he does. After a full intro from the cast of Matt Stone and Trey Parker’s Book of Mormom (Complete with Star Wars related cameo by James Earle Jones), NPH took the stage for his big musical opening number.

The song was about how life would be so much more grand if it was like a Broadway show and it included cameos from Amanda Seyfried, Patti Lupone and Modern Family’s Jesse Tyler Ferguson.

First, here’s the part with The Book of Mormon: 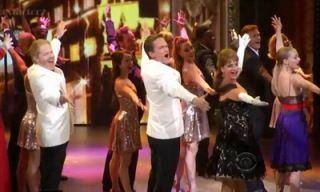