Is This The Inciting Incident For CAPTAIN AMERICA: CIVIL WAR?

A lot of people are walking into the idea of Captain America: Civil War with the assumption that it was the final battle of Avengers: Age of Ultron that spun out into the Superhero Registration act and the ensuing conflict between Cap and Iron Man. Now, we are getting news that it may actually be a whole other thing.

Heroic Hollywood is reporting that the boom that shakes the room involves Captain America (Chris Evans) and Scarlet Witch (Elizabeth Olsen) going up against Crossbones (Frank Grillo). If you believe what we’ve seen in some of the on set pics (below) and the rumors, it looks like Crossbones will be coming to the fight in a suicide vest!

“In order to protect the civilians on the ground, Captain America orders Scarlet Witch to levitate Crossbones above ground. She does and unfortunately is unable to contain the massive explosion that sets off near a populated building causing death and destruction.” 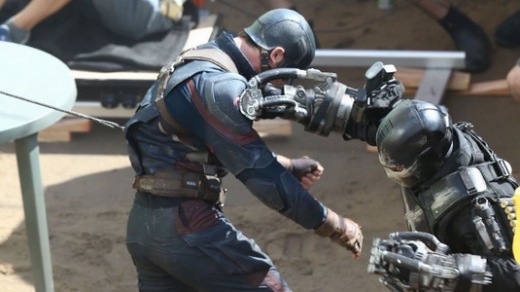