Is This The New Look Of Michael Bay’s Teenage Mutant Ninja Turtles?

Or rather… just his Ninja Turtles. We know… no more teenage, no more mutant. Also, they are all now fashion models by day and sushi chefs by night.

Of all the places I would expect to start seeing information on Michael Bay’s new TMNT film, the Tumblr page of rapper Kid Cudi was not one of them. Still, that is exactly what happened. Here’s the image that appeared on his page today: 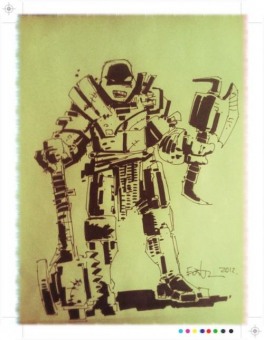 He posted this note along with it:
An original one of a kind sketch of a unknown Ninja Turtle by one half of the creators, Kevin Eastman. A gift given to me by my homies Andrew Form and Brad Fuller over at Platinum Dunes. Hint hint mane.

Does this mean that Kid Cudi is set to play the role of a Ninja Turtle?

Later in the day he also tweeted this message:
“To everyone with doubts & concerns about the new TMNT reboot, trust me, there is NOTHING to worry about. Trust. Everyone will be pleased!”.

Nothing against Kid Cudi, but I reserve the right to remain extremely skeptical.