When I saw this earlier, I honestly thought Jason Alexander was an Oompa Loompa. But no, it’s something equally disturbing. 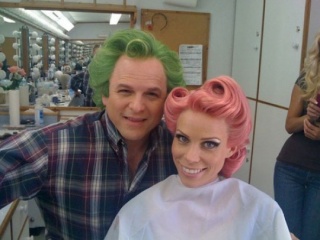 When I saw this earlier, I honestly thought Jason Alexander was an Oompa Loompa. But no, it’s something equally disturbing.

Nickelodeon is currently developing a live-action film adaptation of their popular animated series “The Fairly OddParents.” Titled “A Fairly Odd Movie: Grow up Timmy Turner,” it stars Jason Alexander and Cheryl Hines. Thanks to the pervasiveness of Twitter, we now have our first look of Alexander and Hines in make-up and wig. Disturbing, no?

The movie is made for TV and will air on Nickelodeon in 2011.

Official synopsis:
The movie centers on Timmy Turner (portrayed by Drake Bell), but unlike the series, Timmy is no longer a 10-year-old boy — he is 23, still lives at home, and still attends the 5th grade. Timmy’s arrested development stems from his desire to keep his beloved fairy godparents, Cosmo (Daran Norris as his animated form and Jason Alexander as his live-action form) and Wanda (Susanne Blakeslee as her animated form and Cheryl Hines as her live-action form), because “Da Rules” dictates that godchildren lose their fairies when they grow up. But when Tootie (Daniella Monet), a formerly nerdy girl who’s always had a crush on Timmy, returns to town as a gorgeous grown-up, Timmy finds himself having very adult feelings for her. He must decide whether to grow up and be with the woman he now loves, or continue acting like a child to keep the fairy godparents he adores. In the meantime, Hugh J. Magnate (Steven Weber), a larger-than-life oil tycoon, turns his attention to capturing Timmy’s fairies and using their power to fuel his maniacal ambition.