Jennifer Lopez has teamed up with Walden Media to produce a live-action movie based on the computer game “Where in the World Is Carmen Sandiego?” 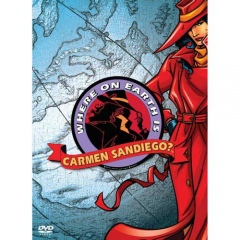 Jennifer Lopez has teamed up with Walden Media to produce a live-action movie based on the popular educational computer game “Where in the World Is Carmen Sandiego?”

Lopez, 42, is attached to co-produce the project, but a source from Deadline also hints that she could also play the detective-turned-thief title character.

The film is said to be a mix elements of “National Treasure” and “The Thomas Crown Affair” — wit ha twist.

“Where in the World Is Carmen Sandiego” has been used as a teaching tool inside classrooms since 1985. It also aired as a children’s game show on PBS from 1991 to 1995. This is not the first attempt at bringing the computer game to the big screen: Disney considered doing a feature film in the late 1990s with Sandra Bullock, but the project never took off.

Here is the logline:
“When the ACME agency’s greatest detective Carmen Sandiego becomes the world’s greatest thief, it’s up to her former partner to follow her clues and track her down. Their cat and mouse game leads the partner to confront a greater mystery: is Carmen really a thief or a hero?”

I think Lopez would be a fantastic Carmen Sandiego, she even looks like the title character and honestly, I can’t think of anyone else playing her.