This makes so little sense that it makes my head hurt.

This makes so little sense that it makes my head hurt. As you may haven noticed, we haven’t exactly been cheerleaders for the NBC/ Bryan Fuller Reboot of The Munsters. I started to feel a little better about the show when I heard that Eddie Izzard was cast as Grandpa.

Now we’ve got some news on casting that just confounds us. Jerry O’Connell has been cast to play the role of Herman Munster. Seriously??!!? This just makes no sense. It doesn’t make sense for any concept of the show that we can imagine and it doesn’t make sense for O’Connell. Look, We love Jerry O’Connell. He’s part of our childhood from Sand by me all the way through My Secret Identity and Sliders and all the way up to Crossing Jordan. But this… we just can’t see it.

Hopefully, we are wrong and this isn’t a disaster in the making. I guess we’ll just have to wait and see. 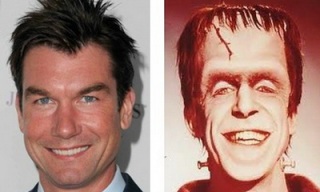