Jurassic World might not have been the best movie ever made, but it was received well enough by moviegoers that it landed Colin Trevorrow the gig of directing Star Wars: Episode IX, at least until Kathleen Kennedy sits down to watch The Book of Henry…

Today we are getting the official title for the Jurassic sequel, as well as a the first poster and a few scant details from Trevorrow, who is producing the movie while J.A. Bayona man’s the director’s chair. Perhaps the most interesting thing said about the movie came from Trevorrow just a couple of days ago when he described the movie as “A Spanish horror thriller with dinosaurs.” 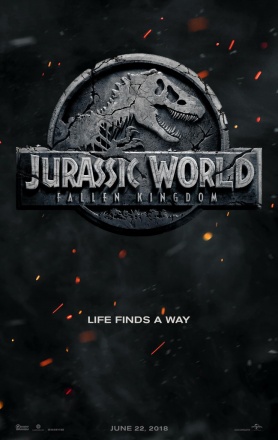 As far the themes of the film, he had this to say:
“It’s definitely about our greed and the depths of depravity that humans will sink in order to satisfy their need for profit. We’re certainly continuing with a lot of those themes but in different ways. But without spoiling anything there’s definitely new themes that have never been examined in a Jurassic movie before that we’ve gotten into that I really think will expand people’s idea of what these movies can be, that it’s not just people running away from dinosaurs on an island.”

Interestingly, while most filmmakers would put their projects above all others, Colin took a moment to suggest the sequel will be greater than his film:
“I gotta tell you man, I think that’s gonna be a better movie. I just do. It’s just deeper, it’s more character-based, it definitely leans into suspense especially in the second half. It does have the big action in the middle and there’s a sequence in the middle that I’ve been watching…I’ve started to see stuff come together and it’s just insane.”