Katy Perry Bounces Her Way On To Saturday Night Live

With Katy Perry as a guest, SNL found a subtle way to poke some fun at last week’s Sesame Street cleavage scandal. Check it out below: 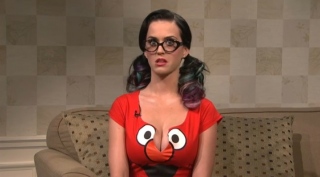 If you are under 25, you might not know this, but there was a time when Saturday Night Live was actually a funny show. Last night however, when it started its 36th season last night it was pretty much the same garbage that it has been for the past several years (with the exception of some great Andy Samberg Digital Shorts). All that said, SNL sometimes finds just the right way to make fun of just how stupid people can be and, with Katy Perry as a guest, they found a subtle way to poke some fun at the Sesame Street scandal. Check it out below:

Also, here’s her musical performances from the show. It’s nice to see a musician actually sing once in a while and not just lip sync. She performed “California Gurls” and “Teenage Dream”.

Finally, just in case you feel the need to see everything Katy Perry did on the show last night, here’s a really awful sketch where she sings the theme song from the fictitious movie, “Boogerman.”