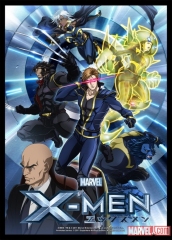 “X-Men” the anime series is set to premiere on April 1st in Japan and Animax. Fans can expect an English version later this year on the G4 network along with Wolverine and Iron Man. An anime version of Blade is also in the works.

“X-Men” anime is set one year after the death of Jean Grey and after the X-Men organization has effectively disbanded. However, Hisako Ichiki (a mutant created by Joss Whedon and John Cassaday in Astonishing X-Men) — a mutant middle school girl living in northeastern Japan — has gone missing. An emergency call for help reunites the X-Men where they travel to Japan and encounter a supremacist cult called the U-Men.

Check out all the amazing images below, and be sure to let us know what you think!