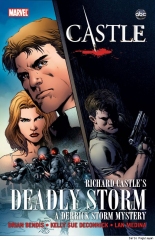 Officially titled “Castle: Richard Castle’s Deadly Storm,” the Marvel Comics graphic novel will go on sale this September. In a press released by Marvel and ABC, Richard Castle had this to say:

“I am honored and humbled to see Derrick Storm join the ranks of some of the greatest heroes of all-time.”

“Being a part of the Marvel family is a childhood fantasy come true for me.”

Meanwhile, Marvel Editor-in-Chief Axel Alonso believes that the new graphic novel based on the hit series will have the potential to introduce new readers to the sequential storytelling medium.

“It’s exciting to bring the Derrick Storm novels to life for the first time ever” said Axel Alonso, Marvel Entertainment Editor in Chief. “Whether you’re new to the world of ‘Castle’ or a long time fan, there’s something for everyone in Castle: Richard Castle’s Deadly Storm-and it’s the kind of book that reaffirms Marvel’s commitment to creating new fans of comic books.”