WTF Disney? You give us Cars 2, but you don’t let us in on what looks to be an epic tale of awesomeness that you’ve created for Indian Movie goers?

WTF Disney? You give us Cars 2, but you don’t let us in on what looks to be an epic tale of awesomeness that you’ve created for Indian Movie goers? The film is called ‘Arjun: The warrior Prince’ and it tells the tale of India’s greatest warrior.

The trailer is currently attached to screenings of The Avengers in India and the movie is set to be released, in India, on May 25th.

I see no reason why a movie like this can’t be released to a US Market. I love Miyazaki as much as the next guy, but come on… if Disney is going to release Ponyo here, then they had better release this as well!

On a total side note… is it just me or do Indians in Disney films look a whole heck of a lot like the Native Americans in Pocahontas?

Thanks to Cartoon Brew for the head’s up on this movie and for the rough translation of the trailer.
Translation:

“Have the mothers of earth stopped giving birth to brave men?” “Is there an archer (who can accomplish this)? Is there?!” Drona: “Yudhishtira, what do you see?” Yudhishtira: “Ten mango trees, three Bo-trees and one Audumbar tree.” Drona: “Move aside! Arjun…?” Arjun: “My eye sees only the eye of the bird, teacher.” Drona: “Then release the arrow!” “If you have to break the Pandavas, then first attack… Arjun!” Draupadi: “Give me your word – that you will take vengeance for my humiliation from all the Kauravas!” “Create the chakravyuha (circular formation)!” Drona: “Get ready for battle!” “Forget about victory and defeat – focus on action and you will fear nothing.” (Thanks, Rohit Iyer) 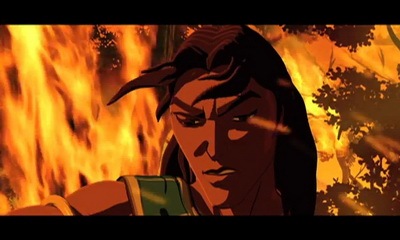