Move Over Glee, Here’s the First Trailer For ‘Pitch Perfect’

The first big movie inspired by Glee, “Pitch Perfect” just released its very first trailer and it actually looks more entertaining than Glee. The film, which is directed by the creator of the popular Broadway puppet show Avenue Q and produced by Elizabeth Banks is the story of an all girl’s school who wants to build up an a capella group to compete with their rival all boys school.

Official Synopsis:
Beca (Anna Kendrick) is that girl who’d rather listen to what’s coming out of her headphones than what’s coming out of you. Arriving at her new college, she finds herself not right for any clique but somehow is muscled into one that she never would have picked on her own: alongside mean girls, sweet girls and weird girls whose only thing in common is how good they sound when they sing together, in the new out-loud comedy Pitch Perfect.

When Beca takes this acoustic singing group out of their world of traditional arrangements and perfect harmonies into all-new mash-ups, they fight to climb their way to the top of the cutthroat world of college a cappella. This could wind up either the coolest thing they’ll ever do or the most insane, and it will probably be a little of both.

Loaded with new takes on old favorites to hits of right now that are seamlessly mixed together, mashed-up and arranged like you’ve never heard before, Pitch Perfect is directed by Jason Moore, who opened our eyes to the very misbehaved life of puppets in the surprise Broadway sensation Avenue Q. 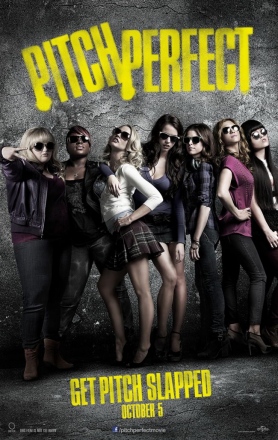