The first theatrical poster for the new CG animated film “Dorothy of Oz” has hit the net.

In this sequel of sorts, Dorothy returns to Oz and joined by her old friends the Scarecrow, the Tin Woodman and the Lion, Dorothy sets out to stop the Jester from using the power of the Wicked Witch of the West’s wand to turn the people of Oz into puppets.

No release date has been set, but the film will drop sometime in May of 2012. 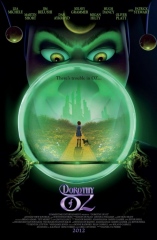