Get ready for the new season of HBO’s Game of Thrones with this 22 minute recap of last season.

HBO’s GAME OF THRONES season 2 is set for an April, 1 premier. The has been a ton of buzz for the series, but there are millions of potentially interested fans who have not had the chance to experience the action, drama and adventure of the first ten episodes. 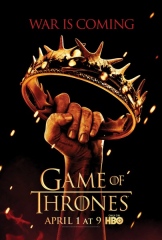