“At one point, the Potter character kills someone with a lightning bolt from his flaccid penis.”

Alan Moore is no stranger towards controversy, he’s also no stranger to taking existing characters and co-opting them for his own stories, take The League of Extraordinary Gentlemen for example. The only problem he is having with his new book is that he isn’t co-opting a 150 year old classic character of literature. It appears that he is giving his own spin to the world’s most famous wizard, Harry Potter. As you can imagine, JK Rowling and Warner Bros are less than pleased.

Here are the details that we know about the new character that will appear in The League Of Extraordinary Gentlemen: Century 2009:
– He’s a wizard
– He’s the Anti-Christ
– He shoots lightning from his junk. “the Potter character kills someone with a lightning bolt from his flaccid penis.”

While Potter’s name is never used, these clues are included:
– A hidden scar
– A magical train between platforms at London’s King Cross Station that leads to a magical school
– A mentor by the name of “Riddle”
– Characters resembling both Ron Weasley and Hermione Granger.

The new book is “”a commentary on a perceived degradation of society, both in our world and the fictional. As the publishing industry takes less risks, originality is visibly dwindling, while major franchises and celebrity biographies are relentlessly pushed upon us.” 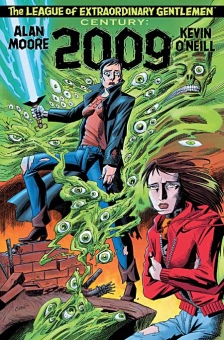