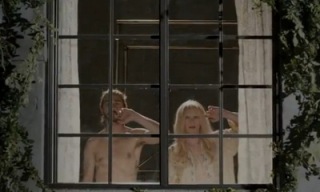 I just spent the last eight minutes watching this and I’m still not entirely sure what I saw. The video is part of something called the “The Valtari Mystery Film Experiment” from Icelandic band, Sigur Ros and it is directed by Alma Har’el. as “artistic” as the endeavor claims to be, you’ve got to applaud their sense of business and advertising. Lord knows that it wouldn’t get nearly as much attention if the penis in the video wasn’t attached to the the headline of the last three Transformers movies… Oh, and just because this borders on soft porn at some points, I’d like to also mention he was in HOLES.

On the upside, the naked girl is super hot.

Please let us know what you think of the video, we are dying to hear your thoughts on the ridiculousness of it all, the art and even on Shia’s little Transformer.

Here’s the description:
sigur rós have given a dozen film makers the same modest budget and asked them to create whatever comes into their head when they listen to songs from the band’s new album valtari. the idea is to bypass the usual artistic approval process and allow people utmost creative freedom. among the filmmakers are ramin bahrani, alma har’el and john cameron mitchell.

“we never meant our music to come with a pre-programmed emotional response. we don’t want to tell anyone how to feel and what to take from it. with the films, we have literally no idea what the directors are going to come back with. none of them know what the others are doing, so hopefully it could be interesting.”