“Fear the Walking Dead” takes us back to the beginning of the zombie apocalypse – a time when the world was changing rapidly for reasons unknown.

Fear The Walking Dead is set to premier next month and the promotional machine is jumping into full gear. I’m sure we’ll have a lot more to show you during Comic Con this week, but for now, we’ve got a new featurette in which the cast and producers talk about what makes the show so emotional and why they love shooting it in LA.

Synospsis:
A companion series to “The Walking Dead,” the #1 show on television among adults 18-49, “Fear the Walking Dead” takes us back to the beginning of the zombie apocalypse – a time when the world was changing rapidly for reasons unknown, before anyone understood exactly what was happening, when life as everyone knew it was upended and altered in ways no one could have ever imagined. “Fear the Walking Dead” is executive produced by Robert Kirkman, Gale Anne Hurd, Greg Nicotero, David Alpert and showrunner David Erickson and produced by AMC Studios. The series, set in Los Angeles, stars Kim Dickens as Madison, Cliff Curtis as Travis, Frank Dillane as Nick, Alycia Debnam-Carey as Alicia, Elizabeth Rodriguez as Liza, Ruben Blades as Daniel, Mercedes Mason as Ofelia and Lorenzo James Henrie as Chris. 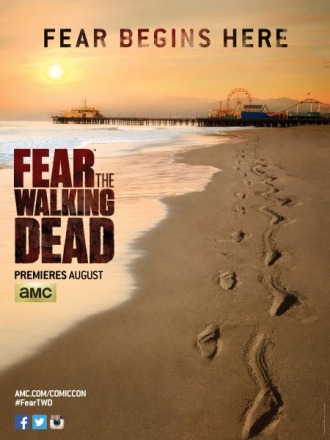