Is that Olivia in a block of Amber?

When the last season of Fringe ended, the team… or most of them, were in the future. The daughter of Peter and Olivia, Etta, was a Fringe agent and she discovered Walter and Peter in a block of Amber. The stage was set for a battle between the humans and the Observers, now we will get to see how it all plays out in the final season of the show.

Fringe comes back on September 28th with the episode:”Transilience Thought Unifier Model-11.″ It carries
forward from the season finale and keeps the story, or at least we think it does, in the future.

We’ve got our first batch of photos from the episode and there is a lot of amber going on in here. One of the images even looks like it might have Olivia in some amber. In the season finale, it had been eluded to that she was killed. Perhaps that isn’t quite the case! 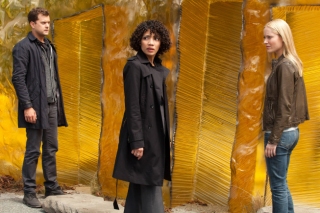 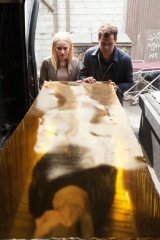