Here are some new screens of Pete Travis’ (Vantage Point) upcoming reboot of “Judge Dredd” based on the adaptation of the popular 2000 AD comic book.

Here are some new screens of Pete Travis’ (Vantage Point) upcoming reboot of “Judge Dredd” based on the adaptation of the popular 2000 AD comic book. The images come to us courtesy of Empire Magazine, which gives us our first full costume look at Karl Urban as the terrifying judge, jury and executioner Judge Dredd. Aside from Dredd we also get to see other Judges such as Judge Cassandra Anderson (Olivia Thirlby).

Here’s the synopsis for the film:
DREDD takes us to the wild streets of Mega City One, the lone oasis of quasi-civilization on Cursed Earth. Judge Dredd (Karl Urban) is the most feared of elite Street Judges, with the power to enforce the law, sentence offenders and execute them on the spot – if necessary. The endlessly inventive mind of writer Alex Garland and the frenetic vision of director Peter Travis bring DREDD to life as a futuristic neo-noir action film that returns the celebrated character to the dark, visceral incarnation from John Wagner and Carlos Ezquerra’s revered comic strip.

“Judge Dredd” hits theaters September 21st, 2012. Be sure to pick up the newest copy of Empire Magazine for more! 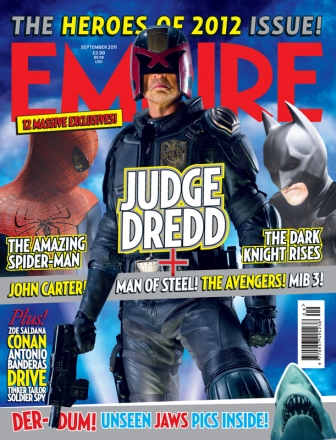