A slew of new set images from the “Dark Knight Rises” have been revealed including a new look Hathaway in what appears to be her full Catwoman costume.

The world caught a glimpse of Anne Hathaway as Catwoman last month in an official release by Warner Bros. and to say it was a massive disappointment would be an understatement. But we were told that there’d be several iterations of her costume and since Nolan hasn’t let us down, the Nolan faithfuls believed.

Fast forward to today. A slew of new set images from the “Dark Knight Rises” have been revealed including a new look Hathaway in what appears to be her full Catwoman costume. Faith in Nolan, now diminishing…

I don’t even know where to start. Is Hathaway a superhero in a comic book world or a chick who hit up the nearest Halloween costume outfit? Everything about how she looks is wrong and I can’t image how even more awful it’d appear on screen. I know Nolan wanted a Julie Newmar look, but this just isn’t right. Coupled that with Tom Hardy’s atrociously silly Bane costume I know my faith in Nolan has seriously taken a hit.

The costume is so dumb, even Batman can’t help but laugh. I still want to believe but I’m just not sure anymore. What do you guys think of the new Catwoman costume reveal? Sound off below! 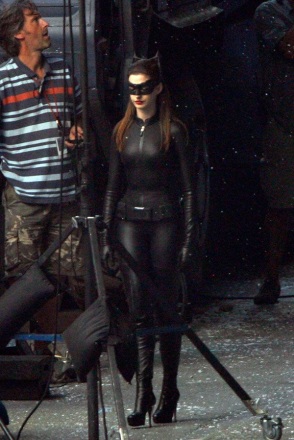