Yamato USA is about to make the fantasy world of Hajime Sorayama a reality.

Yamato Toys is a company that doesn’t get enough attention from American collectors. Most of their stuff is heavily based off of anime properties. At least that used to be the case. In the last couple of years, they started up their Fantasy Figure Gallery line which featured the art of Boris Vallejo, Luis Royo, Julie Bell and others. Now they are announcing that they will be bringing the fantasy art of Hajime Sorayama into the mix. Americans know Sorayama’s work for his gynoids (female robots). His sexy robots were pop culture icons and appeared in several ads and the cover of Heavy Metal magazine. Today they just announced that Sexy Robot 001 will be coming out in January of next year. 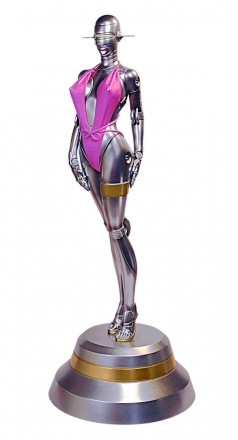 Do androids dream of electric sheep? We may never know. Fortunately, neither androids nor humans have to rely on dreams for visions of this metallic beauty as Yamato USA proudly makes the fantasy world of Hajime Sorayama a reality. Utilizing the latest in digital sculpting technology, Yamato USA’s Fantasy Figure Gallery in collaboration with Jerry Macaluso’s Pop Culture Shock Collectibles presents here one of master Sorayama’s famous “sexy robots” – anatomically correct female robots appearing to have been fashioned of molten silver. This Resin statue of Sorayama’s sexy robot stands approximately 22″ in total and includes specially designed base, as well as removable pink fabric bathing suit all packaged in a collector style window box. The stuff that dreams are made of, Yamato USA’s Fantasy Figure Gallery: Hajime Sorayama – Sexy Robot 001 in Pink Bathing Suit #1 will be available January 2012.