The Toy Story series was great… and even they were smart enough to stop after three films!

The Toy Story series was great… and even they were smart enough to stop after three films! I could say that’s the big difference between Dreamworks and PIXAR, but then some jerk will just throw Cars 2 in my face and I’ll have admit that PIXAR is capable of churning out crap just to sell toys too.

…Anywhoo, There is a fourth Ice Age movie on the way: Continental Drift. This time, the critters from the first three films just cope with… you guessed it, the continental drift. Oh, and also Peter Dinklage is on hand as a made orangutan pirate.

Official Synopsis:
Scrat’s nutty pursuit of the cursed acorn, which he’s been after since the dawn of time, has world-changing consequences – a continental cataclysm that triggers the greatest adventure of all for Manny, Diego and Sid. In the wake of these upheavals, Sid reunites with his cantankerous Granny, and the herd encounters a ragtag menagerie of seafaring pirates determined to stop them from returning home. 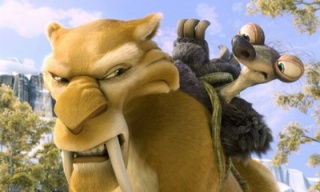