After opening to $10 million last weekend and positive reviews, Dimension Films announced today that a sequel is already being planned for their summer campy 3D film “Piranha 3D.” 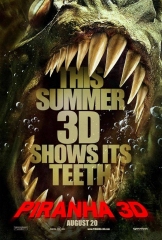 After opening to $10 million last weekend and positive reviews, Dimension Films announced today that a sequel is already being planned for their summer campy 3D film “Piranha 3D.”

Here’s the official Press Release:
After earning rave reviews from top critics, wild cheers from audiences around the country, and $10 million in its opening weekend boxoffice, Dimension Films is pleased to announce that PIRANHA 3D – THE SEQUEL is in the works.

PIRANHA 3D producer Mark Canton stated, “We are thrilled that audiences are not just loving PIRANHA 3D, but cheering for it. And it’s fantastic that so many critics are really getting the movie and recommending it. We can’t wait to get to work on the sequel.”

PIRANHA 3D opened with fantastic reviews from top critics like the ASSOCIATED PRESS and REUTERS, enjoying a very FRESH rating of 80-82% favorable reviews on the popular movie review site ROTTEN TOMATOES throughout it’s opening weekend. The movie has captured the attention of movie fans as well as elite media outlets like The Wall St. Journal, The Daily Beast and The Huffington Post. And taking Hollywood by surprise, PIRANHA 3D – via a partnership with Funny Or Die – is the subject of a much-talked about campaign to be named Best Picture of the year. Funny Or Die’s “For Your Consideration” video for PIRANHA 3D took the nation by storm last week. And, as announced over the weekend, Academy Award ® nominee and Piranha 3D heroine Elisabeth Shue will debut a brand new video in the coming days on Funny Or Die.

Every year the population of sleepy Lake Victoria explodes from 5,000 to 50,000 for Spring Break — a riot of sun and drunken fun. But this year, there’s something more to worry about than hangovers and complaints from local old timers. A new type of terror is about to be cut loose on Lake Victoria. After a sudden underwater tremor sets free scores of the prehistoric man-eating piranhas, an unlikely group of strangers must band together to stop themselves from becoming fish food for the area’s new razor-toothed residents.