Based On The Popular Planet Hulk Comic Line And One Of The Best Hulk Stories Ever Written Comes The Most Incredible Marvel Animated Feature Yet! 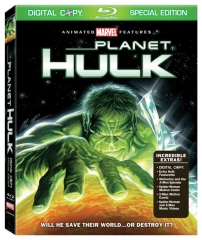 The 2-Disc Special Edition DVD and Blu-ray Disc of Planet Hulk contain a standard definition digital copy of the film as well as “incredible” extras that include audio commentaries, in-depth featurettes, music videos, a full episode of Wolverine and the X-Men featuring the Hulk, 2 complete Marvel motion comics plus a glimpse of the next animated feature film, Thor: Tales of Asgard and more! Planet Hulk will be available on 2-disc Special Edition DVD for $24.98 and on 2-disc Blu-ray for $29.99 on February 2, 2010.

He was a monster, impossible to control, too dangerous to ignore. So Earth’s mightiest heroes exiled him into outer space. But now the Incredible Hulk crash lands on the distant planet Sakaar, ruled by the tyrannical Red King. Sold into slavery, Hulk becomes the planet’s mightiest gladiator-but his new
masters get more than they bargained for when he forges a bond of brotherhood with his fellow fighters: crafty insectoid Miek, ruthless rock-man Korg, ex-shadow priest Hiroim, and the noble-born rebel Elloe. Unlike Earth, the desperate people of Sakaar believe a monster is just what they need. But will the Hulk be the one to save their world. or destroy it?

DISC TWO:
– Standard Definition Digital Copy of the feature film
– Special features may not all be in hi-def. 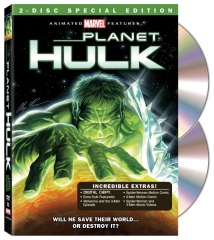