Heroes fans don’t have to give up hope, New acting and writing talent are coming in to make Heroes what it used to be… watchable! 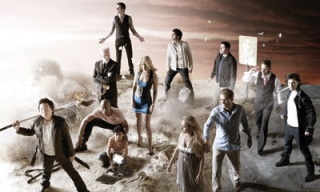 This past week’s episode of Heroes was one of the first ones I’ve seen in a long time that didn’t make my head hurt with suckiness. This whole blurred line between good and evil sucks so hard I lost a filling. Give me someone to root for, and for christ sake… give peter back his damned powers.

There is some interesting and possibly good news on the horizon. First up is news about Sylar’s father. As you now know It isn’t Arthur Patrelli. Well, what we will soon see is that none other than Lionel Kent from Smallville, John Glover, will be playing the role of Sylar’s dad near the end of the Fugitives chapter of the series.

On a bigger note (because it might mean the show will get better!) Bryan Fuller, has rejoined the creative team for Heroes now that his show, Pushing Daisies is actually pushing up daisies.

We’ll start to see his influence in the second half of season three and from what he said in an interview with Michael Ausiello, it sounds like he knows what’s gong wrong and how to fix it.

On the problems that arose in seasons two and three:

It became too dense and fell into certain sci-fi trappings. For instance, in the “Villains” arc, when you talk about formulas and catalysts, it takes the face off the drama. And I think the goal for everybody is to put a face back on the drama. You have to save something with a face; otherwise you don’t understand what you’re caring about. I thought the “Villains” arc started out very interestingly, and then became sort of muddy and dense and I couldn’t get my hooks into the characters to understand their motivations.

I also started to feel confused about what people’s abilities were. One of the great things about the first season is that the metaphor for their abilities was very clear. Those metaphors seem to have gotten complicated in the past two seasons. I share that concern with everybody on the writing staff. It’s not like I’m coming in and saying, “This is what you need to do to fix it!” Everybody knows what needs to be fixed and everybody is sort of rowing in that direction.

His first episode back will be 3X19, the 6th in the Fugitives story line set to begin early in 2009. He mentioned in the interview that the main characters will finally return to normal, non-super-powered, lives (Peter Patrelli is a paramedic! Claire is college-bound!).

There will also be more focus and less plotlines per episode.