Check out the redband trailer for the live action film about a man and a woman and the living teddy bear wedged between them. Remember… Red Band Means NSFW.

The Red Band trailer for Seth MacFarlane’s ‘Ted’ is out and if you like Family Guy then you’ll love it. I actually laughed a lot during the trailer which includes the awesome song about what to do when you are scared by thunder…, but there were hints of some of the typical MacFarlane jokes that tend to always fall short for me. For me, he has a habit of keeping a joke going too long. I get that this is supposed to the joke even more outrageous, but for me, it just makes the joke tiresome. You’ll see what I mean towards the end of the trailer when they get to the “white trash name” gag.

Still, it looks like it could be a really funny movie on the whole. I definitely want to see more.

Official synopsis:
Family Guy creator Seth MacFarlane brings his boundary-pushing brand of humor to the big screen for the first time as writer, director and voice star of Ted. In the live action/CG-animated comedy, he tells the story of John Bennett (Mark Wahlberg), a grown man who must deal with the cherished teddy bear who came to life as the result of a childhood wish… and has refused to leave his side ever since. 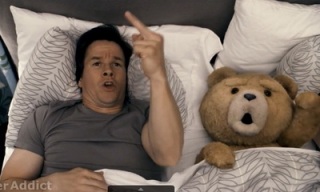