Who would have thought a classic such as “Rock Paper Scissors” can get an expansion pack upgrade… also, an end of credits bonus from the writers of “The Big Bang Theory” to George Lucas and Shatner.

For those who either missed out or don’t watch CBS’ The Big Bang Theory (Season 2, episode 8), a twist to the classic “Rock Paper Scissors” game was hilariously geekified through the expansion and inclusion of a “lizard” and Star Trek’s old-pointy-eared one, “Spock.”

Befittingly retitled, “Rock Paper Scissors Lizard Spock,” below is a promo clip from the show and its rules for your viewing pleasure:

Also, for those who watched the show but didn’t stick around till the end of the credits, there was a special “apology” letter written by the writers of the show to George Lucas, as well as a big PS: “FU” to Shatner, for his part in the garbage-horse-piss that is of Star Trek 5. 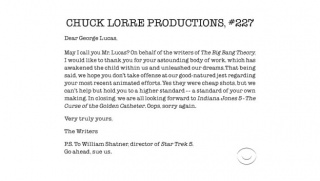