First all, Guillermo Del Toro’s “Don’t Be Afraid of the Dark” has nothing to do with the Nickelodeon series “Are You Afraid Of The Dark.” Second, it’s probably the best horror movie I’ve seen within the past decade. 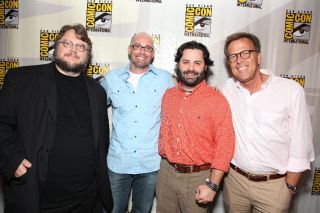 First all, Guillermo Del Toro’s “Don’t Be Afraid of the Dark” has nothing to do with the Nickelodeon series “Are You Afraid Of The Dark.” Second, it’s probably the best horror movie I’ve seen within the past decade.

According to Del Toro, “Don’t Be Afraid of the Dark” is a remake of a childhood TV movie he had seen. He loved it so much he tracked down the rights to it and decided to remake it with a modern twist.

Del Toro promises the film to be a hard hitting, scary, classic. In fact it was given an “R” rating by the MPAA for “pervasive scariness” and nothing else. To back this up, two clips were shown that convinced even the worse naysayers.

The first footage was of a teaser. It began with absolute darkness and a voice over saying, “I see you there sitting in the dark, don’t be afraid we wont harm you.” It then cuts to a little girl crawling under her blankets that appeared never ending… it then quick cuts into a jump scene with one of the ‘tooth fairy monsters’ that scared the crap out of just about everyone in the massive Hall H.

The second and much longer footage was revealed as a prologue to the film that took place during the Victorian era.

It begins with a chamber maid attending to a call downstairs in the basement. It’s dark, it’s creepy. She calls out for Mr. Blackwood, the master of the house and he beckons her to come down in an eerie voice. She comes down slowly by candle light and falls victim to a trip wire. She comes down in a terrifying manner. Mr. Blackwell then creeps out of the shadow covered in blood and missing teeth.
He mounts the chambermaid and with a chisel and hammer in both hand and smashes her teeth out.

Mr. Blackwell then collects the scattered bloody teeth on the floor and brings it near a furnace ash pit. He begins asking someone or something for his son back. Saying he has done what was asked of him. The darkness replies, telling him to reach for his son. But something wicked ends up dragging him into the pit violently and swift.

Crowd erupts into applause and then quietly hid their collective shame of having crapped in their pants from the footage.

At the end of the panel during the Q&A section, Del Toro confirmed that he is working on another horror film as well as a re-imagined Pinocchio that would be based on the original fairy tale design. Lastly, he also welcomed anyone with script ideas or artwork to give it to him. Promising that he’d read and respond to anyone via email.

Sally Hurst (Bailee Madison), a lonely, withdrawn child, has just arrived in Rhode Island to live with her father Alex (Guy Pearce) and his new girlfriend Kim (Katie Holmes) at the 19th-century mansion they are restoring. While exploring the sprawling estate, the young girl discovers a hidden basement, undisturbed since the strange disappearance of the mansion’s builder a century ago. When Sally unwittingly lets loose a race of ancient, dark-dwelling creatures who conspire to drag her down into the mysterious house’s bottomless depths, she must convince Alex and Kim that it’s not a fantasy—before the evil lurking in the dark consumes them all.

When a little girl (Bailee Madison) is sent to live with her father (Guy Pearce) and his girlfriend (Katie Holmes) in the old mansion they are renovating, she unwittingly unleashes malevolent creatures bent on destroying all of them.