“Don’t Be Afraid Of The Dark” did the near impossible. It made me scream like a banshee twice…and this is just the preview!! 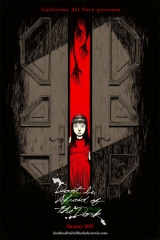 I’m a pretty good judge of scary movies even though they scare me. Here’s how I break it down :

“Don’t Be Afraid Of The Dark” did the near impossible. I screamed like a banshee twice…and this is just the preview!!

He had watched the original as a child and wanted to reinvent it with a modern twist. The goal was to tweak it so that the film would fit today’s world. The idea was to also make it a hard hitting horror movie while remaining a classic. As Del Toro described, with gusto, it would hit “like a motherf*cker”.

Yup. You heard me. He also went on to say that “motherf*cker” is the word of the day and made sure to point out that he is no Elmo. He’s very helpful and hoped there were no small children in the audience. I took that to mean the f-bombs weren’t about to stop dropping. Nice.

Did I mention that I am now a fan of this crazy man? He cracks me up. Know why else he’s awesome? It’s not just because he drops f-bombs or is wickedly funny. He’s so humble. I am a fan for life.

Enough of the new fangirl status. Back to the movie.

He went on to discuss the problems with making “Don’t Be Afraid Of The Dark” by saying “We originally thought we could shoot it as PG-13 without compromising the scares…And then the MPAA came back and gave us a badge of honor. They gave us an R for ‘pervasive scariness.’ We asked them if there’s anything we could do, and they said, why ruin a perfectly scary movie?”

You see, Del Toro believes “horror needs to have balls and they need to be sweaty and wrinkled”. Okaaaay….I’ve never heard of horror movies described that way but whatever works for him.

All I know is that the two little clips I saw so far of this movie (the preview and a tasty little tidbit showing how the horror all started back in the day of the early 1900’s) was enough to freak me out really bad and get me to admit that I’m now afraid of the dark. You also won’t be able to get me in any basements or ash pits anytime soon. Nope.