Resistance Is Not Futile… I Think

We, as a society, are relying more and more on computers and robotics. I’m still waiting for Rosie from the Jetsons to come along. Of course, she’d also freak out sometimes into Crazy Weird Ruby… And ever since then, I haven’t been able to fully trust her. 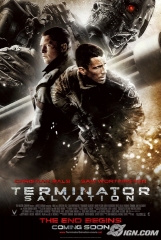 I finally watched Terminator Salvation. Did you know that I actually cried a little and it wasn’t because my eyes find Christian Bale so deliciously scrumptious? In case you didn’t watch it, I’m not going to say anymore other than :

A. Christian Bale = yum yum, Eye want some.
B. The story line totally wasn’t any where near what I thought it was going to be about.
C. I thought there’d be waaay more action.

Yes, John Connor plays an important part in the overall story line but strangely, I found myself more interested in Marcus and his story. Maybe this is because I already kind of figured out that John somehow will save the humans from the big bad Terminators and blow Skynet all to hell and back.

And that’s how I started thinking about our relationship with computers and AI. Actually, to be completely honest, I started thinking about this when I read an article about how schools aren’t teaching grade school students how to write cursive anymore. Those lucky little ankle biters. I remember what a royal pain it was in my ass when I had to sit down and trace all those damn loops,swirls and squiggles. As if that wasn’t bad enough, I had my mom and dad (the penmanship Nazis) breathing down my neck and screeching like crazed harpies whenever my swoopy lettering came out less than perfect. Back then, I dreamed of freedom from the pen. Now, I realize exactly why my parents were so anal retentive about having beautiful penmanship.

Calligraphy is an art form but so is basic lettering. Writing is art in addition to being a way to communicate. But you know what else it can be?

In the hands of a skilled Ninja.Fu master, what appears as an innocent shopping list is actually betraying your deepest, darkest secrets!!

Okay, not exactly but it does give away more than just a glimpse of the personality and frame of mind at the moment the person wrote the grocery list. Scary, huh?

However, pen and paper are slowly going the way of the dinosaur, like 8 track tapes, land line telephone and phone booths. I can imagine the latter would prove slightly troublesome for Clark Kent. I mean, seriously. Where’s the man gonna change into Superman now?

We, as a society, are relying more and more on computers, robotics, and other digital stuff. I mean, think about it. There are people walking around with microchips implanted in their brain and/or hearts that regulate the body’s quirks so that they can stay alive. We’re replacing our limbs and bones with plastic and titanium. First came the broom and then the vacuum cleaner. Good ol’ washing by hand gave way to the miracles of a dishwasher. I’m still waiting for Rosie from the Jetsons to come along. Oh yeah. By the way. Did you know that the same company that makes those Roomba vacuums, iRobot, also makes U.S. military robots? Freaky, isn’t it? And didn’t Rosie also freak out sometimes into Crazy Weird Ruby. I remember that and ever since then, I didn’t fully trust her.

So. Here’s what I’m wondering. It’s no surprise that what was once considered sci-fi is now a reality. For example, the book “Running Man” (which later on became a movie staring the Governator himself, Aaah-nold) heralded the Age Of Reality TV. This kind of makes me nervous because now I’m thinking of a few things…like what happens when machines go haywire and when AI decidedly freaks out. Cases in point besides my Rosie example:

1. Sharon Apple from Macross Plus. On a side note, “Pulse” from that soundtrack is one of my favorite songs of all time. So is “Voices”.

3. The entire Terminator series and the whole “destroy all humans” philosophy. Yeah….I like being alive and I don’t mean like how humans are basically energy producing pods for the machines in The Matrix trilogy. That doesn’t count because I’d basically be the human equivalent of a light bulb that turns into tube feeds for the newly created human energy pods. That is so not fun, tasty or fantastic any way you slice and dice it.

4. On the other end of the spectrum, we have Borgs from Star Trek and the whole “Resistance is futile OMG we’re so gonna borg-ify you, human”. That is also not happy. I don’t know what it’s like to Vulcan mind meld with a machine and be all crazy cybernetic humanoid but even I know that loss of will is so no bueno. I say “NO” to peer pressure and Borg bullies!

5. Robots may be able to start making ethical decisions. What the hell…okay, who decided it was a good idea to see if robots could make these kinds of decisions? What if lightning hits them, fries their circuits and, as a result, they bust a nut and decide to take all the WRONG actions AFTER they decided on what’s wrong and right? * shudder *

6. Skynet is real. No, I’m not kidding. From LiveScience.com, “Great Britain has established a network of satellites for the purpose of coordinating all those drones and other military assets. It shares the same name as a certain villainous artificial intelligence that dominates the “Terminator” movies — Skynet”. OMGWTH, DID THEY NOT WATCH THE TERMINATOR SERIES??!! Maybe the British really do have a twisted sense of humor. This must be what happens when you live in a country where you’re not exposed to a whole lotta sunshine. 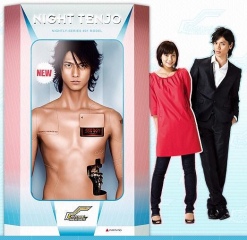 7. I’m already a pretty paranoid person but after I read “Cell” by Stephen King, I’ve become uber paranoid. Take the concept of the book (a pulse sent over a global cell phone network basically wipes all traces of humanity from people’s brains and turns them into homicidal maniacs. Fan-freaking-tastic, man), stir in the bonus “Epitaph One” episode found on SDCC’s edition of “Dollhouse : Season One” and what do you get? Two separate Doomsday scenarios brought about by nefarious ways of exploiting the same technology we now cannot live without. Eeeexcellent.

8. But you know what’s weirdest of all? Robotic lovers….OMG, just like the Japanese drama “Absolute Boyfriend”!!!! I loved that series. The weird part isn’t that I totally cried my eyeballs out or that I was completely obsessed with the show. OMG, I could totally finally Frankenstein the perfect boyfriend!!! Too bad he wouldn’t be human. That’s a total deal breaker for me…but apparently not for other humans. Scientists currently aren’t talking about IF or even WHEN this ever happens. They’re discussing how to make a good product. So far, they’ve come up with a prototype that is the average size of a young Japanese female. She is even learning how to walk and follow simple commands.

Aaaah, the miracles of science and technology. Gotta love it.

Bonnie N. Clyde is a writer for YouBentMyWookie.com and the alias of the Supreme Commander / Ultimate Destroyer. She also has a blog over at MissBonnified.com where you can read more of her musings and rants about how it’ll soon be the end of the world as we know it — and she doesn’t feel fine.