Despite Warner Bros. opening their panel this morning to “Green Lantern,” it was evident by the crowd’s reaction that most attended for “Harry Potter.”

Despite Warner Bros. opening their panel this morning to “Green Lantern,” it was evident by the crowd’s reaction that most attended for “Harry Potter.” Tom Felton who played Drako Malfoy, made an appearance and spoke with overt enthusiasm to the crowd about how grateful he is to have been in such a fantastic franchise and how much he and the entire Potter crew appreciates the fans’ support.

“It was amazing to come and be here and I wish the others could have come,” Felton said.

He also promised that the final two installments will “blow all of the other films away” before fans were shown a extended trailer of the film that appeared extremely dark and chaotic. There were several new scenes that weren’t shown in the first trailer which had been released not too long ago. Most of which were quick cuts of action scenes and scenes of Voldemort and his army (including Snapes) planning an attack with Voldemort claiming that he should have the right to kill Harry Potter.

Felton also talked a bit about how sad it was that the franchise was ending. And typical to his character’s ways, he exclaimed that “Dan[niel Radcliffe]cried like a girl.”

Overall, it was a rather short panel with Felton not sitting but rather standing half crooked at the SDCC podium. But regardless of the panel’s duration or lack of cast appearances, the audience still shrieked and cheered at the new footage. 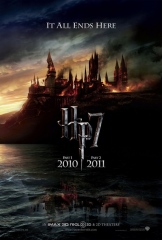