In one of the “surprise” panels in Hall H today at SDCC, Marvel Studios President Kevin Feige announced a special Marvel panel for James Gunn’s “Guardian of the Galaxy,”

According to Gunn, shooing began just two weeks ago, but they had footage to show. The footage gave us our first look of all the characters in costume, whether practical effects/CG combo (Drax, Gamora) or pure CG (Rocket Racoon, Groot) and they all looked fantastic. We see the cast being thrown into space prison by Rhomann Dey and the entire scene is classic Gunn in terms of silliness and humor. Star-Lord is hurt that Dey doesn’t recognize who he is. Groot is so tall, that he has to bend down for his mug shot. Rocket Racoon is rabid and spits as his name is read.

It ends with Dey saying, “They call themselves The Guardians of the Galaxy.” While Peter Serafinowicz’s characters replies, “What a bunch of A-holes.” 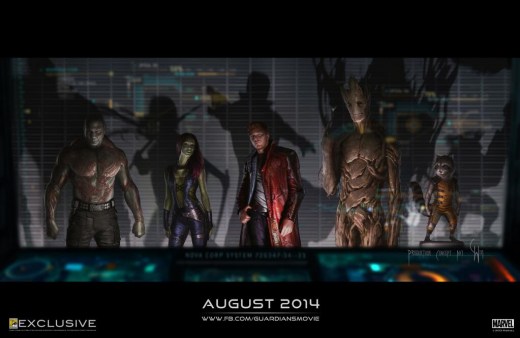