Marlohe will play an “enigmatic beauty” by the name of Sabrine while British actress Harris will play field agent Eve. 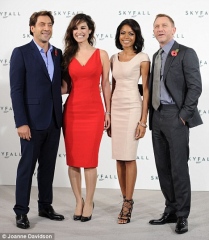 As speculated, “Skyfall,” has since been confirmed as the official title for the upcoming 23rd James Bond film.

Director Sam Mendes (The Road to Perdition) is quotes saying at a London event, “I’m incredibly excited to be doing it and it has…. I think, all the elements of a classic Bond movie including a lot of action and many other things too. There’s lots of surprises.”

“I’ve always been a huge fan of Bond movies as a child and of course every English schoolboy grows up with them. In a sense they’re part of my life. This is an enormous challenge and one I’m extremely pleased I’ve taken.”

Daniel Craig is set to reprise his role as the super agent 007 for the third time. He will be joined by Ralph Fiennes, Judi Dench, Javier Bardem as the villain and French actress Berenice Marlohe as the new female lead alongside Naomie Harris.

Marlohe will play an “enigmatic beauty” name Sabrine, while British actress Harris will play field agent Eve. Rumor has it that her character will be the new Miss Moneypenny.

“Being lucky enough to get the chance to do a third one, it is my intention to make the best Bond movie we possibly could – and Bond with a capital B – and I’m just incredibly proud to be part of this group of people,” said Craig.

“Skyfall” will begin production shortly with an expected release date of October 2012 in the UK and worldwide on November 9, 2012.