‘Solo: A Star Wars Story’ Brings The Team Together In New Poster

Board the Millennium Falcon and journey to a galaxy far, far away…

We’ve gotten the trailer and even some images of the upcoming toys, but we’ve yet to see an official picture that puts the main team together in the upcoming Han Solo origin film, Solo: A Star Wars Story. That has just changed as the first team poster has just been released by Lucasfilm. I’m still not sure how excited I am about this film. Honestly, it’s the Star Wars film I never wanted to happen. The good news is that the first couple trailers have been decent, and the cast of Alden Ehrenreich, as young Han Solo, Donald Glover as Lando Calrissian, Emilia Clarke as Qi’ra, Woody Harrelson as Tobias Beckett, Phoebe Waller-Bridge as the droid L3-37, and Joonas Suotamo as Star Wars’ new resident Chewbacca, is more than capable of pulling it off. 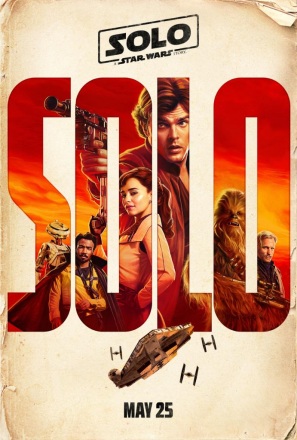 Board the Millennium Falcon and journey to a galaxy far, far away in “Solo: A Star Wars Story,” an all-new adventure with the most beloved scoundrel in the galaxy. Through a seres of daring escapades deep within a dark and dangerous criminal underworld, Han Solo meets his mighty future copilot Chewbacca and encounters the notorious gambler Lando Calrissian, in a journey that will set the course of one of the Star Wars saga’s most unlikely heroes.