Sony Pictures has released the first official images from Michel Gondry’s “The Green Hornet” staring Seth Rogen and Jay Chou. Based off the classic 1930s radio show, which was then later adapted into a television series, it follows the crime fighting adventures of Britt Reid (Rogen), a playboy who becomes a masked vigilante known as The Green Hornet. He is assisted by his valet/sidekick, Kato (Chou) a martial arts expert.

We’ve seen some production images of Rogen before, but this is the first time we’ve seen Rogen and Chou in full costume. It’s nothing really to get excited about other than it seems to be faithful to the original material. Rogen’s weight loss is commendable, however he still seems out of place as a dashing and suave playboy turn crime fighter.

“The Green Hornet” also stars Cameron Diaz and Christoph Waltz. The trailer is set to be released tonight, so check back with us! Meanwhile you can expect “The Green Hornet” to hits theaters on January 14, 2011. 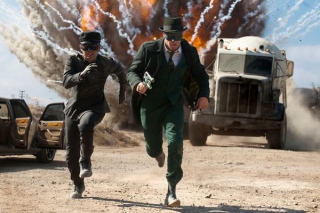 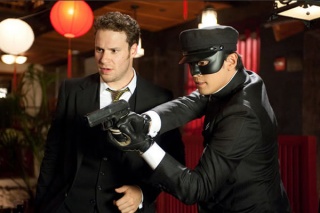