South Park Season 15 is the year of the fan and comedy central is offering an all access documentary about Trey and Matt’s little show. 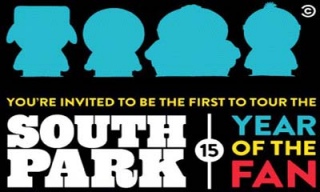 South Park Season 15 is the year of the fan and comedy central is offering an all access documentary about Trey and Matt’s little show. I’ve been a long time fan of the show and pretty excited for this, my hope is that while it’s a cool look inside the making of the show it’s also a bit of a mockumentary.

While the boys that created South Park are riding pretty high with the success of their Broadway play, ‘Book of Mormon.’ The musical picked up Tony awards for Best Musical, Best Direction, Best Performance by a featured actress, Best Orchestrations, Best Scenic Design, Best Sound Design, and Best Lighting Design. That’s a shit ton of awards that two of the best TV writers fully deserve.

This isn’t the first time Comedy Central has something like this with ‘South Park.’ There was ‘Going Down to South Park’ a short doc that is quite dated now but if you’re a big fan still worth a watch. Below is a special treat, the 5th anniversary party!