A Vader selfie? That’s a prequel Vader move, not something the Original Trilogy Vader would ever be caught dead doing!

From announcements in the last couple weeks, we already know that R2D2 will be appearing in the upcoming Star Wars: Episode VII. In fact, we know that he’s going to be made by some fans who impressed the production team at the Star Wars Celebration event in Germany. Today, Star Wars just launched their official Instagram account. What did they post as their first pic? A selfie from Darth Vader Himself!

Does this mean that Vader will appear in Episode VII? Sure, he did die at the end of Return of The Jedi, but I would not be surprised if they find some way to shoehorn him in via flashback at the very least. 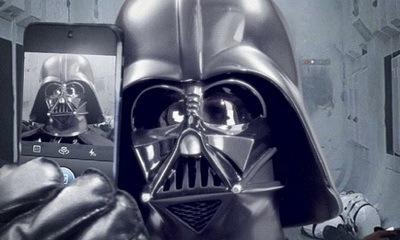 A Vader selfie? That’s a prequel Vader move, not something the Original Trilogy Vader would ever be caught dead doing!