Everything new from helicopters on set to 007 appearing in the film.

There’s a lot of stuff floating around about Star Wars Episode: VII, including leaked images of the actors on set. I’m not going to bother showing you most of those images because they are honestly taken from so far away that there really is no way to tell who you are looking at. However, we have some leaked video and a few juicy rumors for you.

First, here’s a video showing a helicopter shooting a scene at the much reported drone site. It looks like it’s either filming some establishing footage of the republic base or a POV shot of a landing.

Chrome/ shadow Storm Troopers
There’s been a lot of talk about alleged Chrome Storm Troopers. They are now even appearing in an upcoming LEGO set. It is now being rumored that the Chrome troopers are actually the private guard of Episode VII’s main villain.

Endor
We’ve seen the footage of the current set in the UK, but there’s a new set popping up at Puzzlewood in Oxfordshire that, at least according to the signs, is going to be the set for Endor.

Everything we might know about Adam Driver’s role might be wrong
Most of the rumors up to this point have had Adam Driver as a bad guy in the film. However, this image leaked from the set of the Rebel base looks very much it Driver, but in a Rebel Flight Suit. 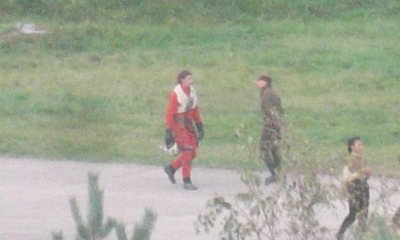 Daniel Craig
A British paper is reporting that Daniel Craig has just shot a small, Mystery role for the upcoming film. There is no word on who he’ll be playing and it is in fact being reported that his face will not even be seen on the screen. Fueling this rumor are several accounts that Craig was seen at the Pinewood set with his good friend, Carrie Fisher.