STAR WARS: ROGUE ONE News Round Up

There are a bunch of little tid bits here, so let’s get down to business. Spoilers ahead!

There are a bunch of little tid bits here, so let’s get down to business.

1. Helmets:
Donnie Yen has revealed a few of the helmets being used in Rogue One. It looks like along with a classic Stormtrooper, we’ll also see what appears to be shadow troopers and possibly some new type of rebellion biker scouts. 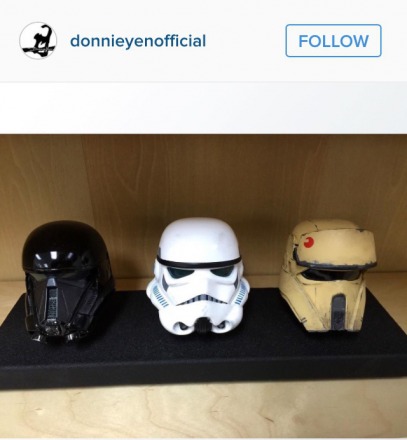 ILM is taking full advantage of the technological wonder that is the Oculus Rift. In a recent interview Director Gareth Edwards talked about how it was used do do some of the pre-visual directing for Rogue One.

As many now know, the Hannibal actor is slated for an unnamed role in the film. Given the characters he’s played most recently on TV and previously as a Bond villain, a lot of people expected him to be playing a bad guy. It turns out that might not be the case. Here’s a snippet from a recent interview:

Q: On IMDB your name is listed just after Felicity Jones. It suggests that it is a great role. Is it a big role?

A: I have not actually noticed that. It is probably because the other might not have come on the list yet [smiles].

A: It is a very important role, as much I can say.

A: No, my character is actually not a bad guy, and then I can not say more.
I can also say that the movie will be shot in Iceland and England. And the filming will last for three months.

4. TARKIN???
The Daily Mail is now reporting that there’s a very good chance we’ll be seeing Peter Cushing’s Grand Moff Tarkin in the upcoming Rogue One. This is a little surprising, as the actor has been dead for quite some time.

Here’s what they said about it:

“This is one of the most complex and costly CGI re-creations ever”. They note that there has been particular trouble around recreating the acting legend’s legs and feet as they were never shown on screen in the original Star Wars due to Cushing’s issues with Imperial footwear. In order to get around the issue, they are combing through countless hours of Cushing’s other performances to find matches to recreate a full range of motion.