Would you watch a Star Wars film about Sabine?

There’s a very interesting rumor floating around Star Wars circles right now about one of the upcoming Star Wars spin-off films. We know that one of the movies is going to be based around bounty hunters and we know that Boba Fett will feature prominently in it. We also know from several sources that Michael Fassbender is being considered for the role of Boba Fett. Now, here’s the new stuff.

Orphan Black’s Tatiana Maslany has recently auditioned for a role in the spin off. Several sources have connected her with having auditioned for the part of Sabine Wren, the Mandalorian rebel from the animated series, Star Wars Rebels.

One of the big theories now is that either Sabine is just one character in the upcoming movie or that she is possibly Boba Fett. A lot of people believe that Boba Fett is more of a mantle than a person. The title of Boba Fett gets passed down to a successor when the previous one dies or retires. Is it possible that the armor gets passed down to Sabine? 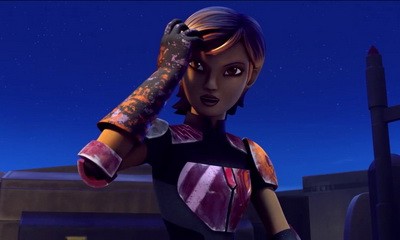