Given how rarely their island has visitors, their curiosity outweighs any skittishness they may have.

While most people were overwhelmed with feels over the behind the scenes footage of Carrie Fisher in last week’s video release from D23, a large portion of the internet was focused on one of the newest editions to Star Wars’ Ark of amazing animals, a group of adorable puffin-like creatures that we now know are called “The Porgs.”

The creatures had been the source of many a set rumor on various Star Wars fan sites, but this was the first confirmation we had that they not only exist, but would be playing a role in the upcoming Star Wars: The Last Jedi. So, to help answer a couple of questions about them, Pablo Hidalgo took to Starwars.com to give everyone a couple of details on the creature that is destined to become one of this year’s hottest Christmas toys. 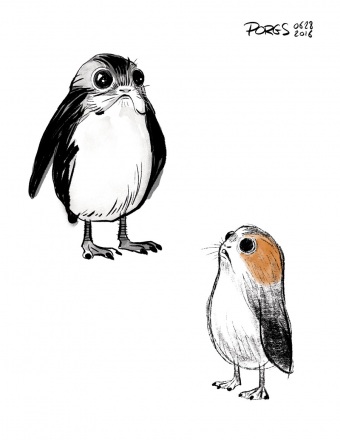 “Porgs are native to Ahch-To, and can be found dwelling along the cliffs of the island where Luke and Rey are. In many ways, they’re the Star Wars version of puffins. They build nests. They can fly. Their babies are called porglets.”

Hidalgo went on to explain that the creatures were conceived and named by the film’s director, Rian Johnson.
“Given how rarely their island has visitors, their curiosity outweighs any skittishness they may have.”

As to what exactly the Porgs are, from a special effects standpoint, Hidalgo explained: “The porgs are realized through a variety of effects, depending on what’s needed. Sometimes they’re puppets, with the puppeteers digitally removed from the shot. Other times, they’re entirely CG.”

It will be very interesting to see what role the Porgs and their little Porglets play in the story of Luke and Rey on Ach-To, and what relationship they will have with our two fearless jedis.