Regency is looking at the property as a potential tentpole film… 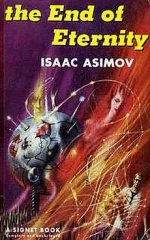 According to Variety, New Regency Films has just acquired the rights to Isaac Asimov’s “The End of Eternity.”

The novel, which was first published in 1955, is a: “futuristic tale in which humanity is controlled by a ruling class called Eternity, members of which can manipulate time to alter history and prevent disasters or wipe out undesirables. One of the time cops flirts with disaster when he breaks the cardinal Eternity rule and falls in love with a woman from another time period.”

Regency is looking at the property as a potential tentpole film. This isn’t the first time the book has been considered for production. Most recently it was set to go through Paramount with Ridley Scott directing and Tom Cruise starring, but it never got off the ground.

Though long out of print, “The End of Eternity” has fascinated filmmakers for some time. The book was most recently set at Paramount with Ridley Scott and Tom Cruise but the project never got off the ground.