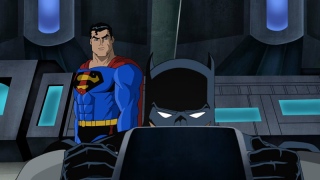 In the film, United States President Lex Luthor uses the oncoming trajectory of a Kryptonite asteroid to frame Superman and declare a $1 billion bounty on the heads of the Man of Steel and his “partner in crime,” Batman. Heroes and villains alike launch a relentless pursuit of Superman and Batman, who must unite – and recruit help – to stave off the action-packed onslaught, stop the asteroid, and uncover Luthor’s devious plot to take command of far more than North America.

“Based on the past success of Superman Doomsday and Batman Gotham Knight, we know the pairing of the Man of Steel and the Dark Knight – pitted against both their DC Super Hero colleagues and the entire rogue’s gallery of DC villains – will offer fans the level of entertainment normally reserved for the big, summer blockbuster films,” said Amit Desai, WHV Vice President of Family, Animation & Partner Brands.

“This is the ultimate film for DC animation lovers featuring not only the cornerstone characters of comic book and Saturday morning heroes, but also returns the seminal voices of those characters – Tim Daly, Kevin Conroy and Clancy Brown – in a story that explores the Superman/Batman dynamic and allows Lex Luthor to shine in ultimate villainy,” said Gregory Noveck, Senior VP Creative Affairs, DC Comics.

Featurettes
The Blackest Night: Inside the DC Comics Event: Behind-the-scenes of BLACKEST NIGHT, the epic DC Super Hero event in which the dead shall rise.

A Test of Minds: Superman and Batman featurette with Jeph Loeb, giving viewers a fresh and revitalized look at the team-up of Superman and Batman working together despite their often competitive and challenging relationship.
“Dinner with DC: With Special Guest Kevin Conroy”: Reprising his role from Batman: The Animated Series, Kevin Conroy joins the crew for dinner to discuss their creative approach and what the Superman/Batman team-up means.The evening will be hosted by Voice Director Andrea Romano, Producer Bruce Timm and DC’s Gregory Noveck
Extended Sneak Peak at Next DCU Film
Digital Copy Download
Widescreen (1.78:1)
Two Episodes of Justice League Unlimited hand-picked by animation legend Bruce Timm